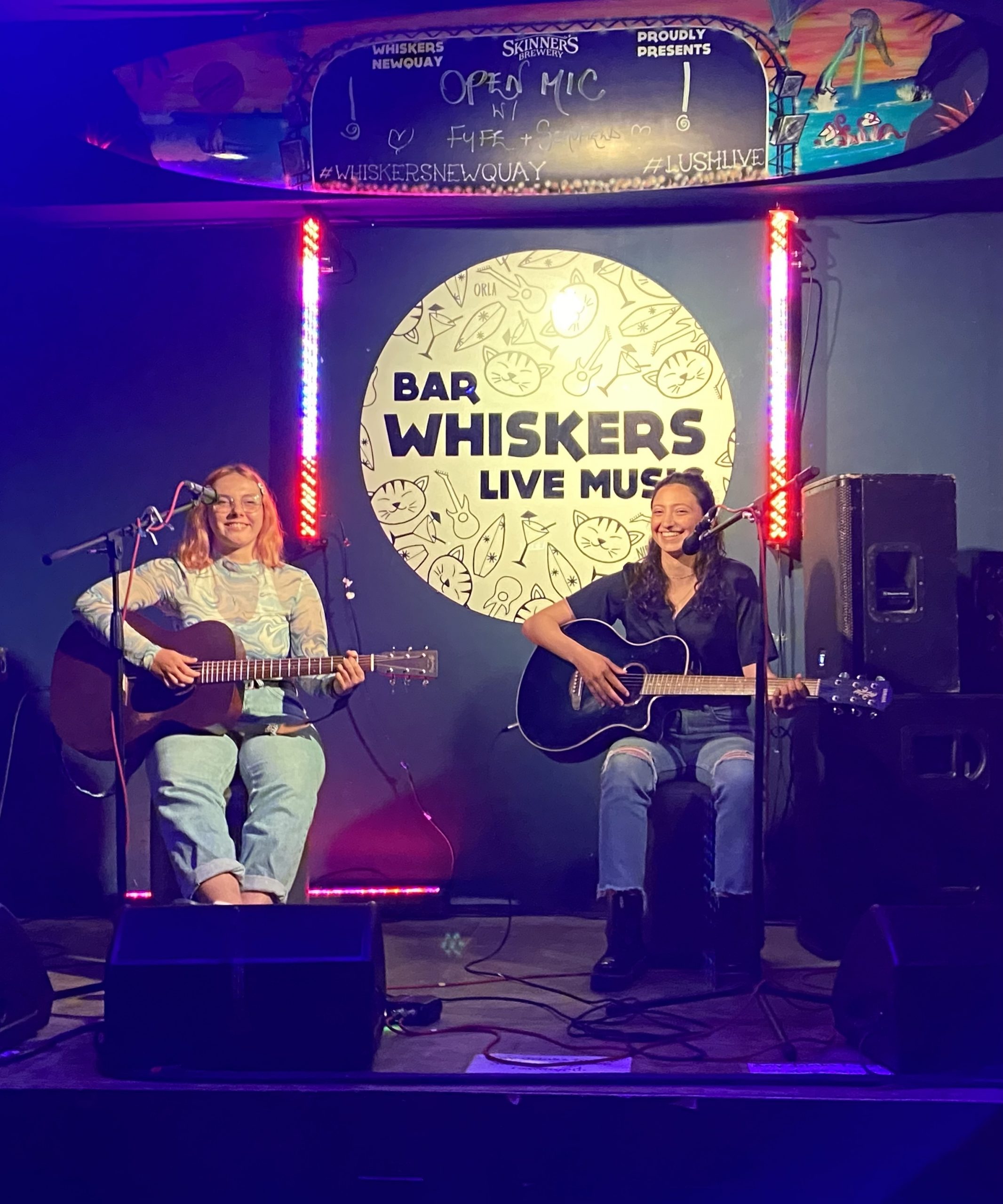 One gig, one song, two artists: breaking the language barrier at Babel

By Alex TrumbleOctober 11, 2021No Comments

We hand the Babel blog over to two of our students – Agustina and Gwen – to recount how they wrote, practised and performed a song at a live music venue right here in Newquay, Cornwall.

Heading towards the end of the week after an amazing surf in the morning we started to write a song with the helping hand of Becks and Alex. 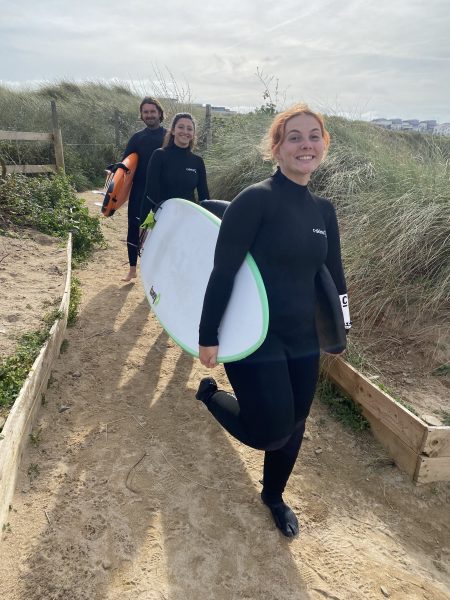 So, you see… two different first languages (German and Spanish), with quite an age gap and in general we seem to be quite different but we both share a passion for music. This might seem a bit cliché, but we were united through the process of song writing and composing.

Finding the chords and the leading melody quickly turned out to be the easiest part of the writing process as tunes speak all languages. But words do not … so we started communicating our ideas for the lyrics through Google Translate.

The hardest part ended up being that certain lyric ideas would rhyme in Spanish but not sound harmonic at all in English. It came in handy that one of us though already speaks English on a quite high level. Agustina would come up with the philosophical and deep sense of the phrases while Gwen would end up putting that sense into a harmonic English phrase.

Our individual abilities of us both complimented each other amazingly. Agustina’s creativity along with Gwen’s sense for melody and knowledge of English were the perfect match!

After an afternoon and a morning of hard work we ended up with a song which in our opinion has quite deep and philosophical lyrics in English – even though English is neither of ours first English. 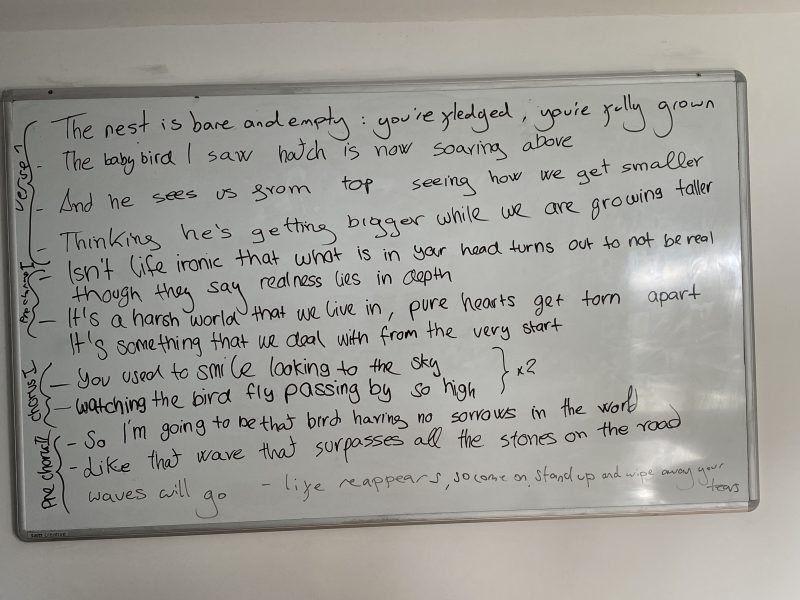 On Saturday we got a text from Becks saying that we could perform the song at an open-mic stage at Whiskers bar. At first it seemed quite crazy to perform a song that was written on Thursday … on Monday.

When we met again in class on Monday, we spent all our breaks practicing the song over and over again getting more confident in our abilities each time.

We ended up getting ready together at the Callisters (Gwen’s host family): picking outfits, getting dolled up and once again repeated practising the song.

After getting ready we were having dinner with the Callisters when Jay (Gwen’s host dad) mentioned an encore song.

Horrified, we realised: we must learn another song?!?

We went up to Gwen’s room again and started to practice a second song … ‘Riptide’ by Vance Joy. A song that Agustina had never played before. At first it was a big challenge, but after a couple repetitions she quickly got the hang of it.

So, there we were, having an encore song and an original song to perform, looking good and nervous for our performance!

Our 10 minutes of fame

We arrived at around 8 at an empty Whiskers bar down in Newquay town centre. It took until 9 until the bar started to fill up. 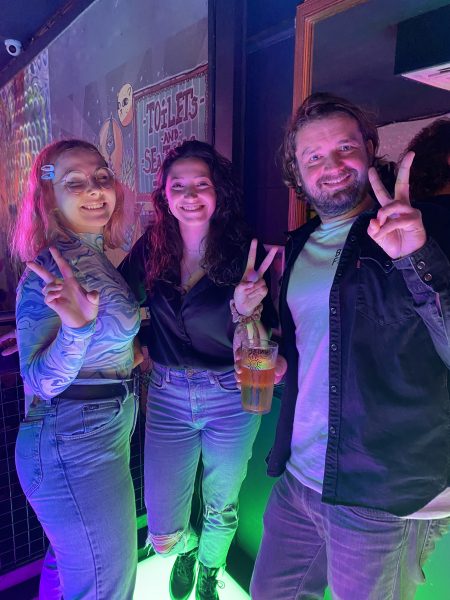 The guy who led the open mic (aka “the tall good-looking ginger Scottish guy”) came up to us and asked us for our names and for a band name (which matter of fact we didn’t have.) We started to brainstorm and tried to communicate a combination of our two nicknames: Agsy + Gwen burger = Ags Burger.

As we told him that name over the loud music, he replied questioning “Raspberries?” and we decided to just stick with this funny misunderstanding. (Though we still don’t quite know how he understood Raspberries.)

After our info was taken a big question remained: when are we performing on stage?

We waited and waited, getting more nervous with every second passing until we were called on stage – finally!! 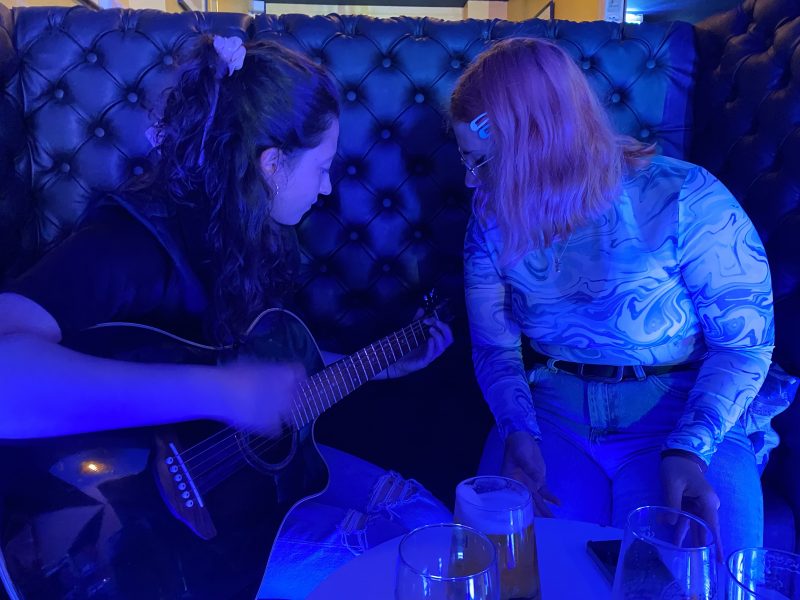 Though we did run into some trouble – a mistuned guitar, forgetting the lyrics to the song you wrote yourself – the support of the people watching us made us keep going.

When we first started the song it felt like the bar went silent, no one was talking and you could tell that people were listening.  It was such an amazing feeling to have these strangers seemingly enjoying the music that we wrote!! 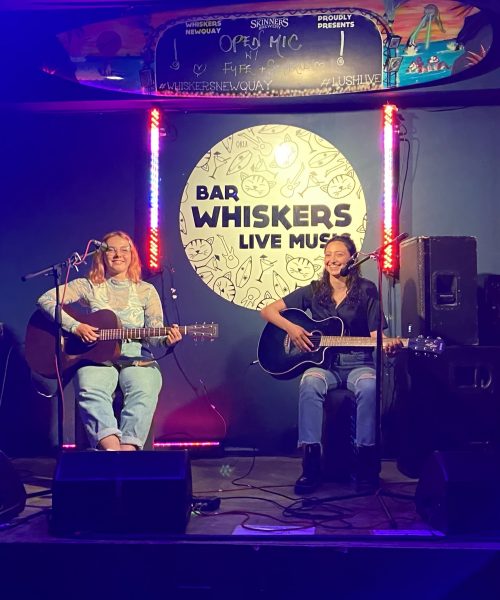 Though we don’t think that anything will compare to feeling we got when he heard the crowd cheering for us once we were done!

Oh, what a night to remember that was and what a story to tell everyone once we get back!

We couldn’t have been prouder of these two. Thanks again to Whiskers for their warm welcome … check out the live performance over on Babel’s IGTV Channel: @babelfishlanguageschool