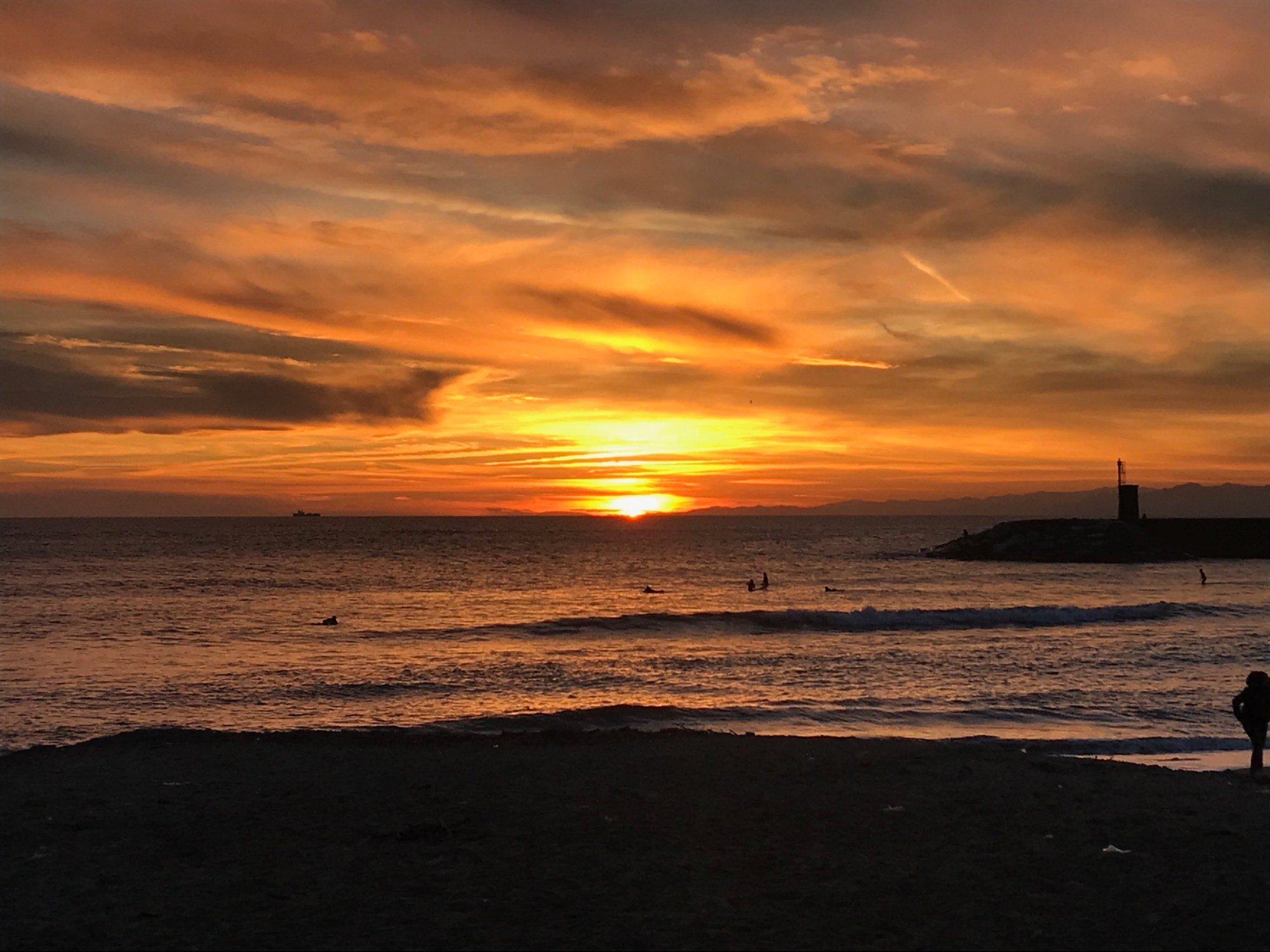 My feet were freezing. The sensation was like they were being bitten, and this feeling made me wince in pain.I looked at the backdrop, and beyond the rooftops and orange trees, I could see snow capped mountains. I followed the flow of the snow that became a little river, and I watched it twinkling in the distance. The river flowed down the mountains, and out into the mouth of a beautiful bay. And it is this bay that I found myself in, surfing a glassy wave, with my Italian friends. A bay at the bottom of a snow capped mountain. It was cold.

“Alex, don’t worry! I surfed a few weeks ago and it was quite warm.” This was the response from my friend Michele when I questioned him about the fact that I had just seen a local surfer getting back to his car, post surf, dressed in full winter regalia – wetsuit, boots, gloves and hood. I, on the other hand, had a borrowed wetsuit. And that was it. But I trusted Mike. He had never let me down. He always took me to eat in amazing restaurants, ordered the best coffee, went to the best bars. And now he was taking me to a semi-secret Italian surf spot and the waves looked surprisingly good. I had no reason not to believe him. Apart from the fact that everybody else seemed better equipped. “They’re Italian.” I thought to myself. “They aren’t used to cold water. I’ve got years of Cornish winters under my belt. I’ll be fine!”

If seeing the surfer in full winter kit wasn’t a warning, crossing the river mouth to get to the sea really should’ve been. Holy moly it was cold! My feet were almost instantly numb. I looked at Michele and Stefano. “It does feel quite cold.” I said tentatively. “It’s just the river, the sea will be fine!” Classic optimism from Michele. The sea wasn’t fine. It was very, very cold.

Despite the fact that I was ill equipped and bordering on hypothermia, I loved being in the sea in Italy. When you surf in a country that you haven’t surfed in before, it’s a great feeling. Everything is different from home and it’s exciting. You feel as though you are truly connecting with the place in a way that standard ‘tourists’ aren’t. The waves were around 1 meter high, clean, fast and fun. The water was dark, almost black and I had no idea what was on the bottom. Michele and Stefano are both doctors, so I assumed they wouldn’t be taking me anywhere particularly dangerous. Wrong again. A few days later, explaining to a Swiss surfer where in Italy I had surfed, he said “Oh yeah, that’s the place with the old cars under the water! You have to be careful when you surf there!”

Surfing is relatively new to Italy and Michele and Stefano epitomise the spirit. They live in Turin and Milan respectively and therefore have to travel at least two and a half hours to find waves. They work long shifts as resident surgeons and have little time off. That makes their commitment all the more impressive. And in Italy, there is so much more to the ‘surf trip’ than surfing. It’s about the appreciation of the place, the history, the food, the people, the scenery and the culture. From an outside perspective, surfing seemed to be a little less commercial than in other countries. Sure, there are businesses like surf schools and shops and of course they need to make money, but there seemed to be a willingness to share – both information and equipment. We rented a board from a shop and the guy was closing to go surfing himself. He gave us the board and said to bring back when we were done. We gave him 10 EUR at the end of the day and he was just stoked to talk to other surfers, especially one from England.

The friendliness and willingness to talk to travelling surfers, and the fact that surfing is so new to Italy should not detract from the fact they have some really good waves and some very talented surfers. Leonardo Fioravanti from Rome is a world-class surfer, turning heads at Pipeline no less. Equally, the local guys at the spot that I surfed in Liguria were ripping. The wave was a bit awkward; quite thick, fast breaking into shallow water, and they had it totally nailed. I saw a couple of little airs, some long floaters and a lot of incredibly smooth turns that displaced more water than Pavarotti bombing off of a 10m diving board.

Post surf was an absolute joy. The town had its annual saints day and the streets were rammed with people and food stalls. I tried Porchetta, which is slow roasted pork cut thinly and placed in the middle of two pieces of focaccia and pressed back together on a hot plate. Washed down with red wine served in a plastic cup. Perfect. We walked around the town, visited the church, tried focaccia from at least two other shops, we stopped for coffee, bought artisan pesto and of course – more focaccia. We drove to Recco, a nearby town and walked around. I chatted with the lady in the local surf shop, BlackWave, who was very excited to hear about and English school that offered surfing. If you’re in the area, go see them and rent some equipment https://shop.blackwave.it/

I love Italy. There is nothing I can say here that hasn’t been said before. There are a million guides of what to do, where to go and what to see. The waves are not amazing very often, but they can get extremely good. George Eliot said of Italy that there is ‘visible history.’ And there is. It’s everywhere. You almost trip over it. You need to pay attention when you’re walking or even when you’re surfing. It is intoxicating, or as Beppe Servergnini once wrote: “It’s alluring, but complicated. It’s the kind of place that can have you fuming and then purring in the space of a hundred meters, or in the course of ten minutes.”